NEWARK N.J. – U.S. Senator Bob Menendez (D-N.J.) joined today with representatives of the New Jersey Manufacturing Extension Program, the New Jersey Chamber of Commerce, and other business leaders to discuss the CHIPS Act and urge its passage this week.

The legislation would provide $52 billion in subsidies to incentivize U.S. computer chip manufacturing and semiconductor production and decrease dependence on foreign manufacturers. Expanding domestic chip production would help ease supply chain disruptions that have impacted the economic recovery from the COVID-19 pandemic as a chip shortage has affected many industries including automobile manufacturers, technology and cell phone companies, home appliance producers, and more.

According to data from the U.S. Census Bureau, in 2020 there were 354 establishments in New Jersey in the semiconductor space and classified as Computer and Electronic Product Manufacturers (NAICS Code 334 includes the manufacturing of computers, computer peripherals, communication equipment, and other electronics as well as companies which manufacture components for these products). Census data available from 2017 shows total retail sales from this sector in New Jersey were $7.6 billion. 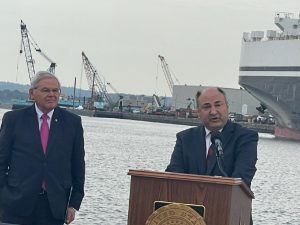 “The ‘CHIPS Act’ allows American semiconductor manufacturers to maintain leadership in technology while reducing dependence and vulnerability on foreign suppliers. The 21st century will be driven by innovation and technology in advanced semiconductor production and advanced assembly technologies,” said Bill Foley, President, American Microsemiconductor, Inc. “The ‘CHIPS Act’ can reduce American dependence on materials and equipment from foreign companies. From these capabilities, we will be able to shore up production gaps that have occurred over the years. These gaps have led to rising production and material costs with delays in deliveries. We have all seen it and no one has been immune to these price changes.”

In addition to the CHIPS Act, the Senate is also expected to vote in the near future on another bill that will have positive impacts on supply chains and would authorize construction of the NY & NJ Harbor Deepening Channel Improvements. The Channel Improvement project calls for deepening the pathways to Elizabeth – Port Authority Marine Terminal and Port Jersey – Port Authority Marine Terminal by 5 feet to a maintained depth of 55 feet allowing for the safe and efficient passage of larger vessels and increased volume of goods. The project is also expected to create approximately 88,000 full-time jobs.

Included in the CHIPS Act is a provision championed by Sen. Menendez in partnership with the NJMEP for the creation of a National Supply Chain Database. The database would help prevent future supply chain disruptions by offering manufacturers key information as they make decisions on how to retool in critical areas to meet the demand for products, such as defense supplies, food, and medical devices. The bill sets aside $131 million to help fund the creation of the National Supply Chain Database.