Tunnel Diode and Back Diode

Tunnel Diode and Back Diode

A tunnel diode is a semiconductor diode with a negative resistance region that allows very fast switching speeds, up to 5 GHz. The operation of the tunnel diode depends upon a quantum mechanic principle known as “tunneling” wherein the intrinsic voltage barrier (0.3 Volt for Germanium tunnel diodes and 0.7 Volt for Silicon tunnel diodes junctions) is surmounted due to high doping levels which enhance tunneling. Referring to the curves below: superimposing the tunneling characteristic of the tunnel diode upon a conventional germanium P-N junction, we have: 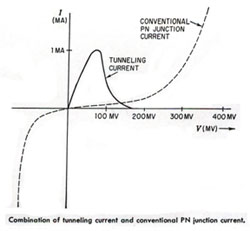 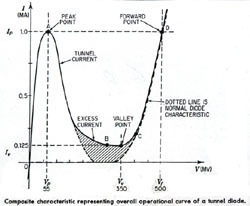 BACK DIODE A back or backward diode is a tunnel diode with a suppressed Ip and so more closely approximates a conventional diode characteristic. See the comparison below: 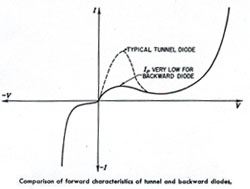 The reverse breakdown for the tunnel diodes is very low, typically 200mV, and the tunnel diode conducts very heavily at the reverse breakdown voltage. Now referring to the Back Diode curve, the back diode conducts to a lesser degree in a forward direction. It is the operation between these two points that makes the back diode important. Forward conduction begins at 300mV (for germanium) and a voltage swing of only 500mV is needed for full range operation. In a Back Diode, the negative characteristic is used as the forward direction and the positive characteristic is used as the negative diode direction.