The rectifier circuit (anode-cathode) has a low forward resistance and a high reverse resistance. It is controlled from an off state (high resistance) to the on state (low resistance) by a signal applied to the third terminal, the gate. Once it is turned on it remains on even after removal of the gate signal, as long as a minimum current, the holding current, Ih, is maintained in the main or rectifier circuit. To turn off an SCR the anode-cathode current must be reduced to less than the holding current, Ih. The characteristic curve is as shown below: 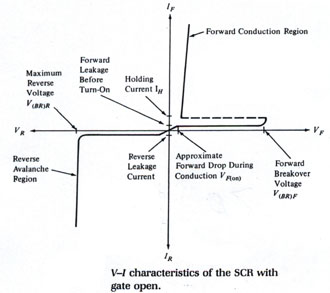 Obviously, the SCR can also be switched by exceeding the forward breakover voltage, however this is usually considered a design limitation and switching is normally controlled with a gate voltage. One serious limitation of the SCR is the rate of rise of voltage with respect to time, dV/dt. A large rate of rise of circuit voltage can trigger an SCR into conduction. This is a circuit design concern. Most SCR applications are in power switching, phase control, chopper, and inverter circuits.